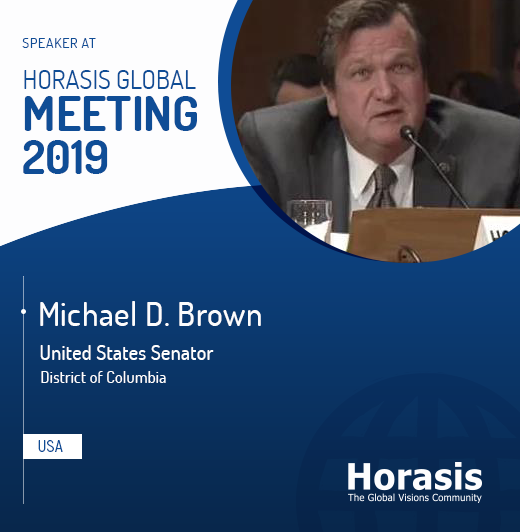 The Horasis Global Meeting, themed “Catalyzing the Benefits of Globalization” was held 6-9 April 2019, in Cascais, Portugal. View the 2019 Horasis Report.

United States Senator Michael D. Brown (D-DC) noted during the grand opening that after years of economic dominance the US needs to recognize a new reality.

Senator Michael D. Brown addressed the situation in the US where the number one promise of President Trump during the last election was to reform NAFTA, but it has not been endorsed by Congress. “When it comes to policies of America negotiating with the rest of the world, we are seeing a pushback now. As the economy changes, nations try to implement many defensive mechanisms. We like to think of ourselves as democracy first, but actually we are capitalism first.” Brown also remarked: “There’s an old saying in US politics that the cream will always rise to the top, but so will the scum.” In the end, every member of the panel acknowledged that there are different forms of globalization unfolding at present.

Sen. Brown approached the theme on the US and the Fragility of Globalization saying “China and the US make up 40 percent of the world GDP. The US started to realize we need to cooperate with the world to keep with the new economic system. Politics is a popularity contest and politicians argue, but it will be business that will lead the way to globalization, not politics. Old American unemployment has gone down. We are struggling in the US to make a transition between manufacturing and technology. The role of a politician is to listen to people’s concerns and get educated. My hope is to bring the world together and have mutual benefits. Globalization is not about making America great again. It’s about keeping America always great.”